Dr. Angela Boyazis is a Chiropractic Physician who grew up in Johannesburg, South Africa. She received her undergraduate degree from the University of Florida. Angela developed a passion to help patients reach full health potential with chiropractic and wellness care. The decision to become a doctor of Chiropractic was influenced by her own experiences with Fibromyalgia, an eating disorder, chronic inflammation, and neurological damages caused by medical error. She received her Doctorate of Chiropractic at Cleveland Chiropractic College in Kansas City. Dr. Angela keeps up with the latest in sports medicine such as kinesiology tape, functional movement and myofascial release. Dr. Angela also has a passion to help animals and had a mobile Animal Chiropractic business in Colorado. Dr. Angela’s time off is spent with her husband caring for their dogs. 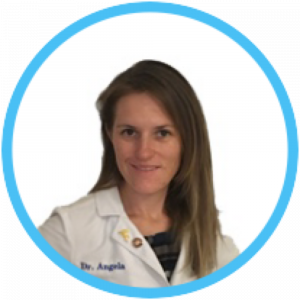